The Solution for Comp & Ben

COO at intuo
View all articles

Let’s break this up into the familiar parts: Why, how, what. I’m not going to waste a lot of time writing an introduction because you’ll skip it anyway. That’s also why the picture of a lion a bit further down below is also completely irrelevant. Just had to grab attention. Just wanted to note that this post won’t give you the final answer, but it will help you a whole lot if you’re willing to put in some mental work.

HR-minded people who are in charge or are very much involved with compensation & benefits.

You will be able to set up a stronger and more future-proof com & ben model.

Why? — The Value Proposition

When designing a compensation strategy, this is honestly the most important question to ask. And I don’t mean you should ask yourself “why do we need a compensation strategy?”- I mean, duh. But ask: “Why would people really want to work for us?” In other words, what’s our employee value proposition? And not the soft-marketing kind, but really your employer strategy. There’s a simple (≠ easy) strategy exercise that looks much like the layout of this blog post that’s called “Who, what, how”. Ask your HR team to really think about these questions: Who do we want to attract? What will be our value proposition? How will we deliver on that value proposition? For example, for us at INTUO it looks very much like this:

Who? Independent, ambitious people with a great sense of purpose that have tremendous growth potential (regardless of age)

What? More impact, ownership, and growth than elsewhere.

How? By growing faster than average companies, we’ll need them to grow fast with us and take up roles and responsibilities they wouldn’t get elsewhere. Learning by doing (and by making mistakes). That and we have an appealing mission statement.

Grooowl (if you didn't read the intro, you won't get this)

Once you’ve defined your employer strategy, you can now derive more or less how you want to reward them. Firstly take into account these basic principles before answering the questions below.

Pay according to value, not performance

Right, so here are some questions for you to answer. Do not start thinking about all the details already, just answer with one to three sentences:

Now the only thing you have to do is write down between one and five tracks that will cover your entire rewarding strategy. Check whether they meet your strategy, the general conditions, and your earlier decisions. If not, reiterate again. You can add other things like a car-upgrade in "Type" or top-performers in "Who". Go wild on your ideas, but try to keep the end result simple. And don’t forget to mention the frequency of your adjustments.

The framework for designing compensation tracks

You’ll pay for performance mostly, put everyone through the same system and give managers the opportunity to hide behind that same system. “I can’t help it that they made me force rank on you”. Usually, they have a bonus for top-management as well, that’s administered by HR, but set by the business.

One type of self-steering compensation process

You give everyone a group bonus and do special stuff for the top and bottom 10%. Focus on paying fair by looking at someone’s market value, but do something out of the ordinary for the top-performers and low-performers.

Where everyone is paid fairly compared to market value, but some people move up the consulting ladder because they show more value. A case can be prepared with the coach every quarter and is then presented to a committee of top-managers and HR that decide over promotions. Both the coach and the committee know what to look for in a consultant to see them move to the next level. If the committee’s decision was negative, the person can still prepare a new case for next quarter, because they will receive concrete action points.

This is a typical scenario where the manager gets more responsibility in deciding how to divide their pay increases. Finance first gives a budget to HR, HR then assigns that to managers and does a suggestion for pay increase (based on data they received from other managers (performance snapshots) and sometimes the team as well). The manager decides how to divide it.

Where the manager gets bigger responsibility

intuo is not a comp&ben consultant, but we realise the importance of having all these operational factors on point. We have accumulated a lot of real-life experiences from several of our customers that managed to tackle this issue and then improve their culture with our tool. Talk with us and find out how they did it. 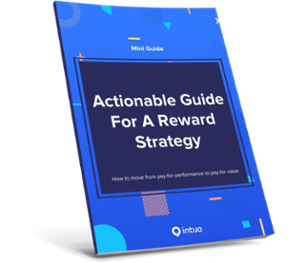 Autonomy vs Money in the Battle for Retention

Most works of art, like most wines, ought to be consumed in the district of their fabrication.